"Magnum, why does the floor move?"

Okay, so I've modified the quote a bit today - it should read, "Indy, why does the floor move?"  But today isn't about Harrison Ford, it's about the first choice for Indiana Jones, Tom Selleck.  Forgive me, but I think that would have been a mistake.  Don't get me wrong, I'm a big Tom Selleck fan - I even named one of my characters after him - but I think I may be the only person in North America that actually liked the movie Lassiter.  I just don't think we'd have made it to see Sean Connery as Henry, Sr. if we'd started with Tom.

Yesterday was, of course, Must See TV Thursday and I promised to address the special case of Magnum PI in today's post.  You may have wondered how I could do that on Fiction Friday.  I opted for something that treads the line between horrible fan fiction and unlicensed use of trademarked and/or copyrighted material.  If you aren't familiar with the show, watch a clip (at least the first minute) - what follows won't make any sense at all if you can't hear John Hillerman's wonderful baritone droning on about... everything.

Oh, and I wrote it as prose because I don't know how to write TV.  Yet.  Come on Tank, where's that program?

"My goodness, Magnum."  Higgins tore his glasses from his nose in aristocratic fury.  "I cannot, indeed, will not, believe that this drivel passes for journalism."  He threw down the newspaper, an article about the best TV theme songs prominently displayed. 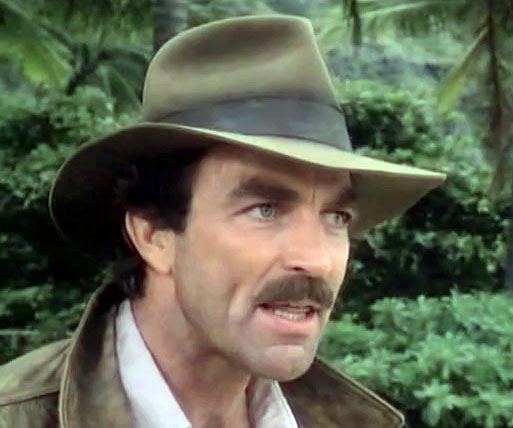 "Now Higgins."  Thomas flashed the million dollar smile, spread his arms wide in an attempt to calm the old soldier but instead came dangerously close to knocking over a priceless vase.

"Be careful with that!"  Higgins moved around the desk, surprising spry, guarding the artifact with his body. "Must I remind you that that vahze was only recently recovered from the excavation of the ruins in Mara Pichu, and is to be a gift from Mr. Robin Masters to the delegation for Hawaiian Independence at Thursday next's luncheon in the Blue Mango Club?"

"I'm sorry.  Look, you need to get to the end."  Thomas was torn between laughter and concern that the minute judo master would send his massive frame crashing to the rattan mat at his feet.

"Really.  Imagine how awful the stories about what passes for your sordid adventures would be, without that cacophonous ruckus at the beginning showing our lovely island from T.C.'s helicopter."

T.C. looked up from the copy of Ex-Patriot Today he was reading.  "Higgy-baby has got a point there."

Magnum back pedaled.  "I'm not arguing with you guys.  I think our theme is the best there ever was on television, I'm just saying you should read the whole article."

Higgins scowled, then satisfied the vase was safe, returned to his writing desk.  "Very well.  Where was I?"  He resumed reading the paper.  "Ah yes.  Dr. Who... no discussion complete... the American Mark Post.  Oh."

Magnum smiled again.  "Go ahead Higgins.  Read it out loud."

Higgins was embarrassed though it only showed as minor irritation.  "Really, your sophomoric games weary me.  Lads!"  He started to get up, but Magnum insisted.

"No Higgins.  I really think you should read it out loud."  His bushy mustache danced over a smile smug enough for an entire winning polo team.

"Fine."  Higgins once again put on his glasses and, standing in his khaki jungle uniform with spectacles perched on his nose, read from the paper.  "Of course any list of top TV themes must exclude  Mark Post who's prolific work defined the soundtrack of American television for a decade.  His theme for the hit show, Magnum PI - really, they couldn't think of a better name?  His theme for the show, Magnum PI, is perhaps the finest example of synergy in all of television, surpassing even that of Miami Vice and Jan Hammer.  Think about it.  How many bars of the Magnum theme do you need to hear before you smile?"

Higgins looked up.  Thomas smiled.  T.C. looked over, magazine folded over his lap.

"Drivel," said Higgins with a snort as he turned away.

Magnum's shocked protest was lost beneath T.C.'s deep rolling laughter.
Posted by Jon Stark at 10:05 AM