"You’re a funny guy Sully, I like you. That’s why I’m going to kill you last"

This Wednesday - Movies you can swear by.  Or "why I don't particularly think that profanity belongs in movie scripts any more than a movie script should be longer than 120 pages."

What does that mean?  It means that while there are a handful of very good films that clocked in over 120 pages - some way over 120 pages, generally speaking (as in almost always) being longer than 120 pages is a sign of poor writing.  I believe that the use of profanity in a script follows a very similar rule; while there are a handful of very good scripts that use foul language to great dramatic effect, by and large their insertion serves only to underscore a weakness in the story or writing.

Profanity in writing, as in life, is simply a poor substitute for dialogue.  People swear because they can't think of anything else to say.  You may disagree, but I’ve been sworn at a lot and, trust me, it’s usually because my adversary is at a loss for an intelligent comeback.  Filling your written dialogue with cussing and saying, "That's how these people are" is wasting space.  Dialogue is one of the few places the author has to show the audience about the inner workings of a character.  An argument between two characters that consists mostly of swearing makes both characters seem pretty much the same.  It also makes the author look like he can't write dialogue worth a *$&^.

If the director and actor playing a role feel that a particular scene or character should have profanity in it, and they have decided they want to push PG-13 or go for R, they'll put in the foul language.  And it will be in the right place.  Why?  Because it takes no skill to use short words.  It's just like accents or colloquial dialects - you don't write them out phonetically because that work is done, on the fly, by the actor.  In the mean-time, you are showing off your writing chops with really powerful dialogue that exposes the inner heart of your characters and professional quality skill by not swearing.  You're no gutter-snipe.

Some people are oblivious to foul language.  They don't really even hear it.  These people will not experience any drama reading your script - the effect you were going for has been lost so you should have used other words to convey the emotion of your characters.  Other people find such language offensive and will be turned off by it - whether contest judges, friends ask to provide notes, or even a professional reader - again, not the effect you were going for.  Everything in a 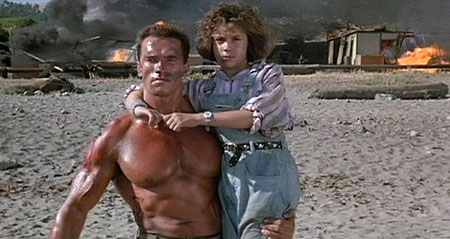 script is condensed from real life.  A little bit goes a very long way.  A lot - of anything - is quite overpowering.

I find that when I'm reading a script, the ugly words (like that?) jump off the page, sort of take me out of the story for a moment.  I have to find my way back in.  There haven't been many exceptions.  Hearing it on the screen is more like real-life, except it has to be consistent - the "token" words always stand out and again, a little bit goes a long way.  If there's no dramatic purpose being served, it's just filler.

“Django Unchained” was filled with profanity and took a bit to get through.  I wasn't impressed by the story or the writing but I also had trouble visualizing everything - all of the characters kept swearing at each other and they were hard to keep track of.  I read a draft of “The Matrix” which had far more - and far stronger - swearing than the final movie.  The finished product was better for the editing, I'm sure that the characters, in real-life, would be foul mouthed, but on screen, there just isn't time to waste with minutes of meaningless words.  “Fargo” had its share of four-letter words too but they were confined to a couple of goofballs and, interestingly enough, illustrated that they were goofballs.  “The Sixth Sense” had one.  It was used fairly early and the entire scene was constructed around getting to the point that the word was used.  Personally, I'd probably have written around it, but then, in case you missed all the clues, I don't use that sort of language.

Interestingly enough, in all of the fiction that I've written, it wasn't until I started writing movies that I was tempted to use foul language in my dialogue.  It must be the influence of all of the action movies from the '80s.  Just remember, the line Arnold is most famous for was completely clean.