I call them Skull Crawlers.

﻿
I got talked into going to see Kong: Skull Island this weekend.  It wasn’t too hard, I loved the original King Kong and am always up for hoping another Kong movie will be good.  The last one was a fairly true remake and while long at times, still captured most of the core story and was generally enjoyable.  I had some concerns about another remake, of course, not the least of which is the current trend toward over dosing on CGI in the modern PG-13 action flick, but I can always close my eyes in the theater and add my voice to the hue and cry against reliance on processors instead of good writing afterward.

As always, the following observations on the merit of the story contain light spoilers. 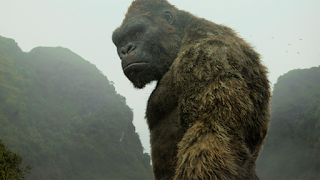 I thoroughly enjoyed this film.  It was exactly what it claimed to be (a PG-13 action movie) and executed itself well.  The acting was top notch with John Goodman doing what he does best and Samuel Jackson channeling Kurtz perfectly.  What an amazing idea.  (Heart of Darkness is one my all-time favorite stories.) And then John Reilly.  I will never see him as any other character again.
There were several good story choices made.  The first was setting the action in 1973.  The world we live in today is too far removed from the original setting of the Kong legend to resonate with younger viewers, but post-Vietnam isn’t.  The choice lent a spectacular soundtrack, political conflict that echoes exactly what we are going through today, and an easier Kurtz connection for those who think Apocalypse Now was the original story.

The second great choice was reimagining the storyline.  I’ve always dozed off when Kong goes to New York.  No worry about that now.  It’s more Jurassic Park III than Jurassic Park II.  And I liked number three.  (Speaking of number three, my #3 left saying, “I have a new favorite movie.”)
The sets were outstanding.  The real-world backdrop was stunning, the actual sets were crafted with attention to detail and added to the realism.  The CGI effects were woven into the real with skill and care.  CGI.  Present.  Absolutely.  BUT!!!!  And this is important; the effects were not the draw of this film and were not used in place of plot.  Just the opposite.  The effects add to the story telling and draw you in.  I actually wasn’t even aware of the CGI until the climactic battle when the analytical side of my brain said, “Wow, that’s good use of CGI.”  I never once worried about getting a headache or said, “Really?  I’d rather see 10 real soldiers than 100k drawn by the computer.”  Remember the original Jurassic Park?  It’s special effects like that.  But with today’s higher resolution.

Finally I want to talk about what is perhaps the most impressive part of the entire movie.  The dialogue.  There are a lot of characters.  Many of them are extremely similar in appearance and costume.  None of them are cardboard cutouts.  You know who they are by how they act and what they say.  That is extremely good writing.  You’d think there was a Gilroy involved.  I am very interested in reading the script.
There are probably purists out there who will lament the loss of certain story elements.  I caught myself several times saying, “Ah, this where they will have the XYZ scene” only to find it missing entirely.  The original King Kong is still a great movie.  I will watch it again.  This Kong is not that Kong and doesn’t even try to be (read: “Not a love story”).  It’s a reimagining of the conceit and it’s told with skill and style standing strongly in its own right.
I think this summer’s offerings will have a hard time matching the total package this popcorn flick is.  The IMDB “Parent’s Guide” section is spot on, make your ultimate decision accordingly.

Email ThisBlogThis!Share to TwitterShare to FacebookShare to Pinterest
Labels: Tales From the Script